Watch: Insanely Weird Trailer for 'Beyond The Black Rainbow' Sci-Fi

Watch: Insanely Weird Trailer for 'Beyond The Black Rainbow' Sci-Fi by Alex Billington February 10, 2012 Source: Apple Let the new age of enlightenment begin. Ohh do we have something totally weird for you to end your week with. Magnet has unveiled the first official trailer via Apple for a strange, mysterious, trippy indie science fiction film called Beyond The Black Rainbow, written and directed by Panos Cosmatos. Deep within the mysterious Arboria Institute, a disturbed and beautiful girl is held captive by a doctor in search of inner peace. Her mind controlled by a sinister technology. The cast includes Eva Allan, Michael Rogers and Scott Hylands. This looks insane, yet potentially brilliant like Cube, I need to see it. Give it a shot below. Set in the strange and oppressive emotional landscape of the year 1983, Black Rainbow is a Reagan-era fever dream inspired by hazy childhood memories of midnight movies and Saturday morning cartoons. Beyond The Black Rainbow is written and directed by up-and-coming Canadian filmmaker Panos Cosmatos, making his feature debut. Produced and filmed in Vancouver, this premiered at the 2010 Whistler Film Festival and also showed at several film festivals throughout 2011, including Tribeca in New York, Fantasia in Montreal and Fantastic Fest in Austin. Magnet Releasing will be bringing Beyond The Black Rainbow to theaters but hasn't setup the official release date yet. For more, visit their official website or Facebook page.
Pubblicato da enzo aronica a 20:49 Nessun commento:

WORLD PRESS PHOTO OF THE YEAR 2011 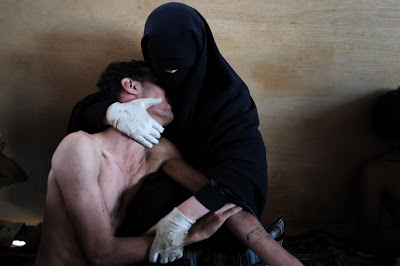 A woman holds a wounded relative in her arms, inside a mosque used as a field hospital by demonstrators against the rule of President Ali Abdullah Saleh, during clashes in Sanaa, Yemen on 15 October 2011. SAMUEL ARANDA NATIONALITY: Spain WEBSITE: www.samuelaranda.net ABOUT: Samuel Aranda was born in 1979 in Santa Coloma de Gramanet, Barcelona, Spain. When he was 19, he began working as a photojournalist for El Pais and El Periodico de Catalunya. A few years later, he traveled to the Middle East to cover the Israeli-Palestinian conflict for the Spanish agency EFE. In 2004, he joined Agence France-Presse, covering multiple conflicts and social issues in Spain, Pakistan, Gaza, Lebanon, Iraq, Palestinian Territories, Morocco and Western Sahara. Read more about this photographer Commissioner: for The New York Times
Pubblicato da enzo aronica a 09:36 Nessun commento:

“Nightscapes” – creating a timelapse film on a minimal budget

Nightscapes from Phil Arntz on Vimeo.

Raiding The Lost Ark: A Filmumentary By Jamie Benning

Raiding The Lost Ark: A Filmumentary By Jamie Benning from jambe davdar on Vimeo.

After 8 months of reading, chatting, trawling, editing and agonising, it's finally here! You can contact me on Twitter @JamieSWB and at Filmumentaries.com. There is also a Raiding the Lost Ark Facebook group.
Pubblicato da enzo aronica a 23:41 Nessun commento: